¡Carnaval! Carnival in Cádiz and Tenerife 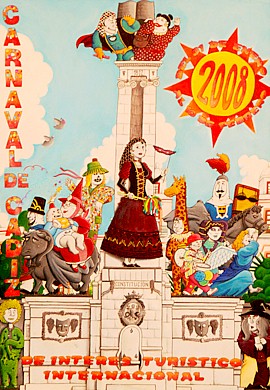 It's Carnival time in Tenerife and Cádiz!

If you thought that festive Carnival celebrations were the exclusive property of Brazil or Venice, you'll be in for a wild surprise during a February visit to Spain. The most famous Spanish carnival celebrations take place in Tenerife in the Canary Islands and Cádiz in Andalusia.

Tenerife’s Carnival is similar to that of Río de Janeiro, perhaps simply due to geography, since Tenerife is a tropical island with an average temperature of 22º Celsius throughout the year. For "Tinerfeños", Carnaval is the event of the year. Locals work diligently on their costumes for months before the start of the festivities. Dance, music and color take to the streets during the the island's Carnival parades. The most important parades take place in Santa Cruz de Tenerife, the capital of the island. If you're eager to see local color and culture while you learn Spanish, Carnival is an ideal time for Spanish course at don Quijote Tenerife.

See some of our students' photos of past Tenerife Carnivals.

The Carnival of Cadiz is equally famous. Gaditanos have their own way of living Carnaval. Following more in the Carnival footsteps of Venice than Río, Cádiz revelers get together with a group of friends to dress up according to a theme and sing songs with lyrics written as a parody of current Spanish public events or news. The essential ingredients of the Carnival of Cádiz are fun, flamenco and "cachondeo" (joking). And yes, like the Carnival of Tenerife, with don Quijote, you can enjoy the Carnival of Cádiz from the comfort of a Spanish course and student accommodation.

« Next Article: Note to newsletter subscribers

» Previous Article: Advantages for returning students and their friends.

« Next Article:
Note to newsletter subscribers
» Previous Article:
Advantages for returning students and their friends.