The sun belongs to a Spanish woman! Seriously! 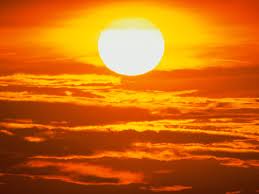 Yea, you heard me right, a Spanish woman from Salvaterra do Miño (in the region of Galicia) has "legally" claimed ownership of the sun towards the end of last month. It took her a couple of months to do so because when she presented her m it had to be legally checked out, but the notaries could not find any legal reason why they could not grant her claim.

Her grandiose idea came from an American who has apparently registered the moon an and many other planets in his name. She heard that he was selling some of his land on the moon to John Travolta when she thought that she could do something similar.

49 year old Ángeles Durán declared before a public notary that she owns the sun, a star of spectral type G2, located in the center of the solar system approximately 149,600,000 kilometers from Earth.

Ángeles does have her logic though, she stated: "Look, if electric companies can make money off of rivers, which belong to everyone, then I hope to make something off of the sun".

She states that she is not stupid and "knows the law" which dictates by an international agreement that no country may claim ownership of any planet or star... but the agreement says "nothing about individuals", she adds. She said that anyone would have done it, but it simply occurred to her first.

Her plan for the sun? Well, you know, the normal.. charge everyone a fee for using the sun... half of the income will be for the Spanish government (she is pretty generous) and 20% to help Spain's low pension funds. How much could this mean for Spain? Well, estimates calculate that it would mean 13 billion Euros for the struggling Spanish economy!

It gets even better! 10% will be for research and education, 10% to eradicate hunger in the world, and 10% for herself! Considering the amount of people forced to use "her sun" I am pretty sure that 10% will be a nice hefty sum of money!

I wonder if international monopoly laws can come into play....?

This is not her first "brilliant" idea. She also has registered in her name Tarzan's scream (yea, she owns it, seriously) and the longest musical score in the world which is related to the telecommunications industry. If you dial numbers, certain sounds are heard that create "musical scores", which of course, are all hers! :)

« Next Article: Anger at the Lady Gaga Concert in Madrid

« Next Article:
Anger at the Lady Gaga Concert in Madrid
» Previous Article:
STOLEN: A truck full of artwork worth 5 Million Euros!