Mexican Revolutionary Returns to Our Screens

Pancho Villa was a revolutionary from Durango State in Mexico, located in the centre of the country, around six hours north of Guanajuato. First a member and later a leader of numerous bandit groups, Villa became known as a contemporary Robin Hood figure, stealing from rich land-owners in the region and fighting for poor peasants and working classes. Despite retiring from the cause in 1920, aged 45, he was assassinated by political opponents and his dying words are famously reported to have been, “Don't let it end like this. Tell them, I said something”.

In his time, Villa was well-known for his starring roles in Hollywood films, such as Life of Villa (1912) and Following the Flag in Mexico (1916). Indeed, his work on screen and acceptance of a large media following during the revolution was used to fund his army, the Division del Norte.

And now, Villa is to make a return to our cinema screens, as a new film has recently been announced. The work, which is to document the life of this much-admired figure, will star some of the biggest names in cinema, including a number of Spanish stars - most notably, Johnny Depp, Javier Bardem and Penelope Cruz. The film, entitled ‘Wild Roses, Tender Roses’, or ‘Seven Friends of Pancho Villa and the Woman with Six Fingers’, is currently in production and scheduled for release in 2012. 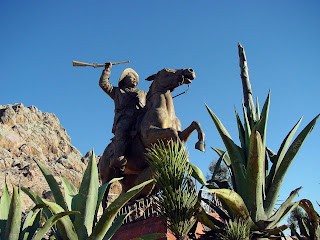