Despite the Catalonian government making the momentous decision to ban bullfighting on the grounds of animal cruelty just two months ago, a vote last week on whether or not correbous should be allowed to continue was passed by an overwhelming majority.

Correbous – a word from the Catalan language – describes the tradition of attaching short sticks with flaming wax or fireworks to a bull’s horns, and then releasing the animal into a bullring or plaza, where people gather to watch and perhaps try their luck at dodging the charging creature.

Defenders of correbous are celebrating the new bill, which protects a number of bull-related traditions in the region and was passed in parliament by 114 votes to just 14. These groups argue that correbous is an integral part of Catalonia’s heritage and that it is a far cry from the cruelty of normal bullfights, since the animals are not killed during the display. Indeed, bull-running events are so intrinsically linked to national identity and culture, that it is not uncommon to hear people claim “I am Catalan, I like the bulls.”

On the other side of the debate, animal rights activists and others criticise the events as irrelevant to modern society and mark the decision as an awful lack of consistency within the law. They argue that correbous is both enormously distressing and harmful to the bulls that are used, since they are frequently burned and hurt during the proceedings.

Perhaps going some way towards a compromise, members of government have announced that the new bill will include safety regulations to protect the bulls and participants of the correbous. For example, there is to be a time limit to determine how long such spectacles can last, as well as the possibility of having vets examine the bulls afterwards for signs of injury. This, supporters say, gives activists the chance to take festival organisers to court should they witness any cruelty or violation of the rules.

Animal-welfare groups, while dissatisfied with the parliamentary backing of correbous, are hopeful that these regulations might mark the beginning of the end for bull sports in the future, since they expect the regulations will prove almost impossible to implement during the chaotic and dangerous events.

Cruelty or custom, it’s hard to say - but there’s little doubt that the debate remains a contentious one which is likely to continue for some time yet. 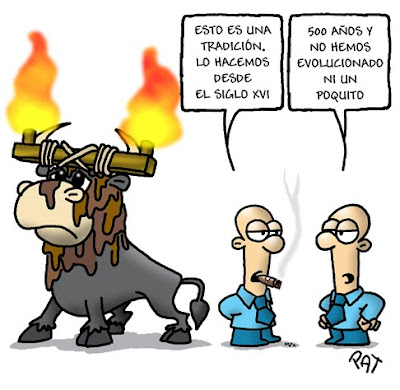