Is your saffron made in Spain? Might want to look again...

You may be asking, "What is saffron?" 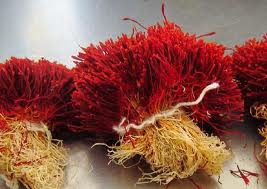 Saffron is an important spice used in Mediterranean cuisine. It comes from a certain species of flower which bears just three stigmas which are dried and used to season and color food. Think about Spanish paella and its rich beautiful yellow color, you may already be guessing, yes SAFFRON plays an important role in this world famous Spanish dish. Saffron is also the most expensive spice in the world by weight, it is native to Southwest Asia, but is an important product of the La Mancha region in Spain.

The saffron produced in La Mancha is high quality, sold by the thread, and fetches up to 3,000 euros per kilo. It is a beautiful red-gold and produces a rich color when used in cooking. It takes 250,000 saffron flower blooms to make just one kilo of this fragrant spice from the flowers' stigmas which are tiny filaments that collect pollen for the plant.

So what is the catch? Spain is a world famous exporter of saffron, but the numbers just aren't matching up. In 2010, Spain exported 190,000 kilos of saffron, yet according to local data, only 1,500 kilos were harvested in Spain. However, only 0.8% of the "Spanish" saffron harvest sold last year was actually grown in La Mancha.

It looks like there is some labeling problems going on. 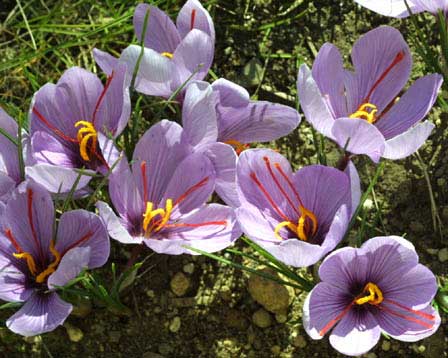 It kind of reminds me of the time I searched the supermarket in Seattle in quest of a decent variety of non-peeled seafood (an impossible task I discovered) and scanning the spices for saffron to make my sister paella. I bought the overpriced saffron and bad selection of seafood and embarked on my feat to introduce my family to Spanish cuisine. I remember when I threw in the saffron, I was amazed by the fact that the beautiful yellow color that the saffron should emit just didn't come out. I put in more and more and more saffron, but never quite got that yellow color... Needless to say, my Seattle Paella had nothing to do with my Salamanca Paella :)

According to the farmers union ASAJA, over 90% of the exports are fraudulent. At least according to other countries' exporting standards. The industry is very profitable, earning over 47 million euros last year. However, it is a very expensive crop to grow, which is probably why some of the abnormal tactics have been implemented.

So if Spain doesn't produce all the saffron it exports, where does all this "Made in Spain" saffron come from? It seems the variation in numbers has to do with a loophole in Spanish laws, which does not make it illegal for companies to buy saffron from other countries such as Iran, Morocco and Greece and package it as a Spanish product. It is quite misleading, especially since Spanish saffron is known to be of very high quality.

Iranian saffron is a profitable option for Spanish exporters, their saffron crop is nearly half the price. However, the intensive methods used there to mass produce the product undermine the quality of the saffron. Some Iranian companies have also jumped on board to take advantage of these lax labeling laws by opening up in Spain and labeling their product as "made in Spain".

According to the Industry Ministry, a new regulation is being considered that would require producers to indicate where the saffron was grown. This would be a big improvement in current regulations, bringing Spain up to date with the International Organization of Standardization guidelines. This would, in fact, protect consumers from paying inflated costs to purchase the prestigious Spanish saffron, but it would definitely hurt the exporters whose production cannot satisfy demand.

The imports from other countries are not the only cause of the export vs. local harvest discrepencies. The Independent, a British newspaper, reported recently that 40%-90% of exported Spanish saffron was made up of other parts of the plant, not the sought after stigma. One sample found cardamom sold as saffron, which is actually a different spice.

So how to tell if you have been duped? The first thing you should do is smell your saffron. Does it smell nice or unpleasant? That is your first clue, real saffron should smell pleasant and it should take awhile to dye your food an intense yellow. Another good indicator is, of course, if your saffron bears the official "La Mancha" label.

Fraud has been going on for quite awhile. Although the director of La Mancha Farming and Livestock council acknowledges that fraud is committed, but not in La Mancha. Valencia and Murcia are likely culprits, since they do not actually grow saffron but do export it.

The ASAJA proposes tariffs to try to deter this deceiving tactic which is affecting their reputation. José María Fresneda (ASAJA) assures that their priority is to protect the farmers who do grow high quality saffron, a key ingredient in making paella "to die for".

I am very happy to read your articles it’s very useful for me,and I am completely satisfied with your website.All comments and articles are very useful and very good.

Your blog is very attention-grabbing. I am loving all of the in turn you are sharing with each one!…

« Next Article: Snow in Spain?