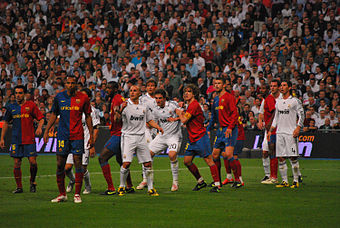 Having been brought up in a football mad household that, if my Dad had his own way, would be a shrine to Arsenal FC, I thought I was fairly football-literate, well at least for a girl. However, coming to Spain, I soon began to realise, the fervour instilled by the Premiership is pathetic when compared with the sheer passion surrounding football’s most famous rivalry.

This weekend’s ‘El Clásico’ between Real Madrid and FC Barcelona was watched by a staggering 12 million people in Spain alone. Every pass was accompanied by agitation, shrieks and yells. The emotions 22 men in pursuit of a ball instils in Spaniards compelled me to find out more about the history of such a revered rivalry- it is the quality of football or the famous cat and dog antagonism that draws people in?

Removing football from the equation, Madrid and Barcelona have always been in contention as they are Spain’s most prosperous cities and represent two major regions. Undeniably, the opposition has always been politically charged- Barcelona is a proud symbol of Catalan identity, separate from the centralising powers of Madrid, that is, in its own words, “mes que un club” (more than a club).

The first match played between Barcelona and Real Madrid was on the 13th May 1902, since then the two sides have met 247 times- 216 official games and 31 ‘friendlies’- with Barcelona winning 103 games to Madrid’s 90.

One of the first catalysts to the teams’ contention occurred in the early 50s when the legendary striker Alfredo di Stefano, was supposedly stolen from Barcelona and nabbed by Madrid. This fuelled the fire of the existing political rivalry, and ever since then the competitive nature has never ceased to intensify. 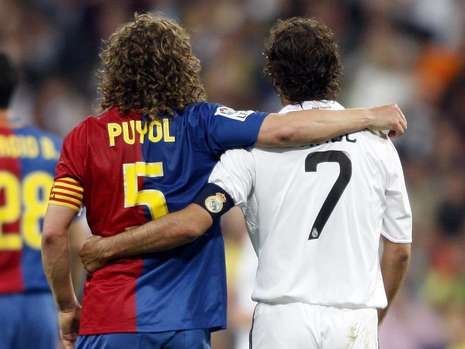 Over El Clasico’s history, there has been a fairly constant stream of players that have been brave enough to cross the treacherous internal transfer path between the two archenemies. Lucien Muller made the bold move in 1965, as too did Bernd Schuster who after 8 years at Barca, moved to Real Madrid in 1988. Michael Laudrup followed in his footsteps in the 90s; Ronaldo did the reverse and moved to Madrid in 2002.

Luis Figo’s decision to move from Barcelona, the club that had launched him to superstardom, to Real Madrid in 2000 was met with the most hostility. The betrayed Barca fans were not best pleased, and amongst the things thrown at Figo in his early days at Madrid were a bicycle chain, a bottle of whisky and a suckling pig’s head!

One of the great appeals of El Clasico is its fairly even results, while Barcelona may have won more games, the competition is always close. The clubs themselves are two of the biggest and wealthiest in the world, with enormous global fan bases, vast stadiums and access to some of the best footballers, managers and trainers on offer. When the two teams met in 2002 in the Champions League semi-final, over 500 million people watched!

Whether it’s the quality of football or the fascinating conflict, without wishing to face the wrath of hundreds of millions of fans or undermine the one of the world's greatest sporting rivalry, it is in the end, just a game.

« Next Article: La Nochevieja Universitaria: A typical New Year in Salamanca, in the middle of December…