La Nochevieja Universitaria: A typical New Year in Salamanca, in the middle of December… 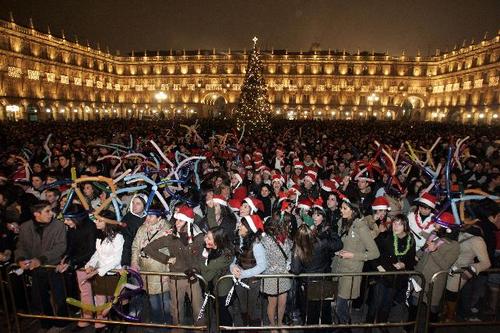 Everywhere you go in the world New Year's Eve is typically the biggest night out on the calendar and in Salamanca, a city renowned for the quality of its nightlife, this is no exception. However, it seems a bit odd to ring in a New Year with all the typical fanfare and celebrations in the middle of December, just as students at Salamanca's University do every year.

Even though actual New Year is still more than two weeks away, it is tradition that students from the university and beyond gather in Salamanca on the 15th of December for one huge fiesta to celebrate before everyone goes home for Christmas. How huge? Try upwards of 30,000 people crammed into the city's spectacular renaissance Plaza Mayor. Just look at the pictures to get an idea of the atmosphere.

Seeing as my time left in Salamanca is now limited to just a few more days, I couldn't possibly miss out on experiencing la Nochevieja Universitaria. Even walking around the city during the day you could notice that the atmosphere was different with large happy groups of students gathering around and watching as a huge stage was being set up on Plaza Mayor. La Nochevieja Universitaria is a renowned event across the whole of Spain and Portugal with lots of universities organising big trips that descend on Salamanca for just one night to then leave, slightly worse for wear the next morning.

By 11pm the Plaza Mayor was already packed with people dancing away to what was quite possibly the best and only techno/electro violin player I will ever see live. Then an hour later it was time for the big countdown. Tradition in Spain dictates that at proper New Year (i.e. December 31st) you should eat a grape every time the clock chimes at midnight. However, at la Nochevieja Universitaria eating grapes is considered bad luck and sweets are used as a substitute. Consequently, watching the concentration on the faces of 30,000 plus people intent on stuffing their mouths with sweets in order to keep up with the chiming clock was entertaining to watch to say the least.

After the countdown the Plaza gradually empties and people pour into the surrounding bars and clubs for what is undoubtedly one of their busiest nights of the year. As is typical of Spanish nights out, the night doesn't actually end until well into the day after and walking to work there were still people (clearly they are the ones with stamina who know how to pace themselves) outside some clubs and on the streets. A fantastic if slightly bizarre experience, I don't quite know what else to say except... 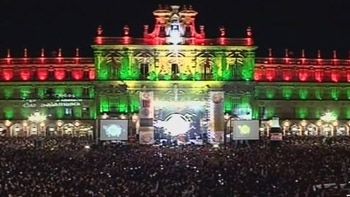 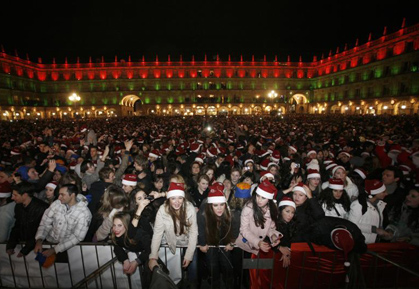