First Baby Born in Spain without a Gene Associated with Cancer 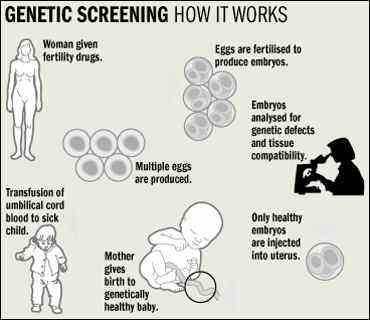 Catalan investigators just recently presented to the world a very special baby born in Spain towards the end of 2010. Before birth, the scientists intervened by means of genetic selection in order to ensure that the fetus would be free of the gene that is strongly associated to breast cancer.

The gene "BRCA1", similar to "BRCA2", is a gene whose carriers, mainly women but also men, often experience tumors in the breasts and other areas such as the ovaries and the pancreas. The woman in this study was no exception. She and her partner decided to visit Sant Pau Hospital in Barcelona to get information about the Puigvert Foundation's Assisted Reproduction Program. The woman's goal was to try to free her future baby from her family's long history of cancer.

The future mother applied to the board of the National Commission for Assisted Reproduction, which for the first time authorized the use of preimplantation genetic diagnosis techniques to avoid tumor related diseases in Spain.

Although the Assisted Reproduction Act Law authorizes the genetic selection of embryos that are free of certain diseases tied to single genes (like cystic fibrosis), cancer cases must be approved on a case by case basis since it is a more complex disease associated to various genes and environmental factors. The cases are approved based on a set of criteria such as the severity of the disease, history of early onset and the parties seeking intervention must not be actively receiving treatment.

Once the intervention is approved, the preimplantation genetic diagnosis procedure is simple. Several ova are fertilized to created several embryos. From these embryos, only those which lack the mutation in the BRCA1 are selected to continue growing. Next, the specialists at Sant Pau Hospital implanted two "clean" embryos in the woman for gestation, of which only one survived.

9 months later this embryo has become the first baby (boy) was born in Spain free of the genetic heredity of cancer. It does not mean that he is 100% guaranteed to be cancer free, but he is free of a specific mutation that would have meant an 80% probability of suffering from a tumor of some sort at an abnormally early age.

Although preimplantation genetic diagnosis has been very successful, the Sant Pau Hospital medical team does not want to get peoples' hopes up. Núria Terribas, the director of the Borja Institute of Bioethics warns that this process cannot be applied to all patients with a family history of cancer. She notes that each case must be studied "history by history" because "we are not able to cure everything, we have to impose certain boundaries" to avoid the possibility of those seeking an embryo "on demand" free of diseases. She also explained that certain possible ethical conflicts exist for doctors because "for many people the end does not justify the means, but we have to put ourselves in the family's shoes and understand that for them the means may be justified."

Also part of the controversy is the fact that Spanish Social Security fully funded the preimplantation genetic diagnosis of this baby in a time of crisis and harsh health care cuts. The director also defended this stating that "we will need to see how much a child born without the cancer gene will ultimately save (social security)"

Currently Sant Pau Hospital in Barcelona is waiting for the green light for another similar intervention. In this case, the family has a history of severe colon cancer and both members of the couple have also suffered from the disease. They want to have a baby and are currently waiting for approval to do so with preimplantation genetic diagnosis.

» Previous Article: Finally: "The KISS" of Shakira and Piqué