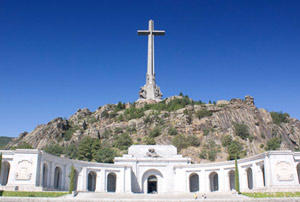 A few weeks ago I visited El Valle de los Caídos and thought it was definitely worth a mention as it’s one of the most unique places I’ve visited here in Spain.

El Valle de los Caídos (literally, the Valley of the Fallen) is a unique monument comprising a huge Catholic Basilica and a stone cross which is a staggering 150m tall, making it visible from 20 miles away. It is situated in the Cuelgamuros Valley, in the Sierra de Guadarrama hills, to the north of Madrid, making for stunning views surrounding the monument.

Upon arrival I learnt that, more that just being an impressive building in the middle of nowhere, the monument was actually conceived to honour all those who died in the Spanish Civil War, which took place from 1936-1939. The dictator Francisco Franco, who ruled for almost forty years following his victory in the Civil War, decided on building the large monument to commemorate the deaths of both Republicans and Nationalists who fought in the war, 40,000 of whom are buried in the surrounding valley, hence the name ‘Valley of the Fallen’. The whole area, particularly the cathedral, has a very solemn feel to it, in light of its tragic history.

However, it was apparent that there was also a controversial aspect to this monument that was not to be overlooked either. Despite being built as a commemoration of all those who died, there are several features which favour the right wing party of Franco, causing some protests in recent years to close and even destroy the monument. It features the inscription: ‘Caídos por Dios y por España’ (‘Fallen for God and for Spain’), a phrase which falls in line with the ideals of the dictator, plus it is known that a considerable proportion of the people who built the monument during its 18 years of construction were in fact Republican prisoners who had been captured by Franco’s side. Some opponents to the monument also think of it as a shrine to Franco, as both he and the founder of the fascist Falange party, Antonio Primo de Rivera are buried within the basilica. Recently in the Spanish news, there has been mention of removing the remains of the two men and locate them elsewhere, in order to avoid this controversy.

Before visiting, I was completely unaware of the historical significance of the monument and its surrounding area, but afterwards whilst admiring the stunning views of the valley, I’d certainly been left with a lot to think about.