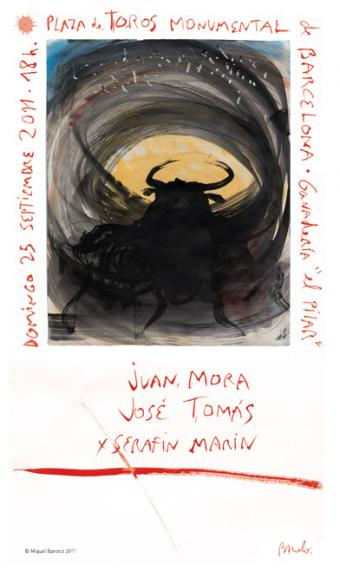 This Sunday will see the last ever bullfight in Catalonia before the ban takes effect in the north-eastern Spanish region. Barcelona's La Monumental is expected to be full to the brim, as over 20,000 spectators bid farewell to the emblematic feature of Spanish culture.

Sunday's bullfight will be a huge spectacle. Not only has the artist Miquel Barceló, one of Spain's most prolific living artists, designed the posters for the final event, but the hugely popular matador José Tomás is set to return to fight in Barcelona for one last time after a serious injury in Mexico, as well as other celebrated bullfighters including Juan Mora and Serafín Marín.

The Catalan regional government voted in July 2010 on whether to ban bullfighting, and whilst many different views were expressed, eventually the ban was passed with 68 votes to 55. Catalonia is the first region in mainland Spain to introduce the ban, with the Canary Islands being the only other, after outlawing bullfighting in 1991.

Some have suggested that the ban had underlying political motives, from a region that is keen to separate itself from the central authority. However, the main grounds for the ban were linked more with animal rights, something that has shrouded the tradition in controversy for some years. The vote was held after campaign group Prou! collected 180,000 signatures in favor of a ban, labeling bullfighting cruel and outdated.

Bullfighting has long been considered part of Spain's national identity. Its roots lie in the Roman era, when bulls were considered sacred. Religious festivals and royal weddings were celebrated by fights, with sacrifices being made for royal favor. The tradition grew stronger and stronger in Spain, and developed over centuries and evolved constantly. The Spanish introduced the practice of fighting on foot in the 1700s, which saw riding noblemen being replaced by commoners on foot.

Today bullfighting is a deeply ingrained and integral part of Spanish culture. It is highly ritualized and the main objective is supposed to be the demonstration of style, technique and courage of the participants

While, of course there are controversies associated with bullfighting and it is certain to continue to divide opinions. The Spanish government has stated recently that the spectacle is "an artistic discipline and cultural product". Despite the ban in Catalonia, bullfighting is one of the best-known customs and a symbol of Spanish cultural heritage that remains to be celebrated throughout many regions.

« Next Article: Guadalajara gears up for XVI Pan American Games