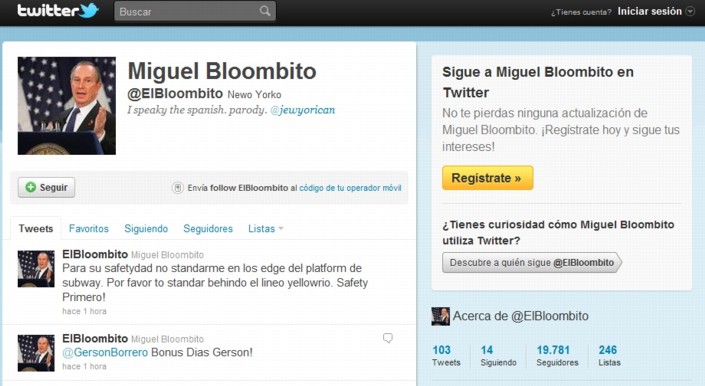 Michael Bloomberg, for those of you who may not know, is the mayor of New York. He is 69 years old and has been studying Spanish for 8 years. Many people may not know this, but after press conferences he always gives a summary in Spanish, something noticed by the large Latin community that he represents.

Before we laugh at the quality of Mr. Bloomberg's Spanish, first I think I should make it clear that I think he is a great role model for other politicians as he shows a true effort to adapt to the changes in America. Learning a language is a big commitment and speaking it in front of people can be scary, and yet he tries :)

Before Hurricane Irene touched land, Bloomberg was warning the Latin population of its eminent danger. That was when Rachel Figueroa-Levin got creative. She is a blogger, a twitter hound, maintains her own website blog and writes just about anything. She thought that Michael Bloomberg's storm warnings delivered in Spanish the previous night were pretty funny, a strong American accent and terrible pronunciation, she laughed and created @ElBloombito on Twitter. The slogan: "I speaky the spanish. parody."

Miguel Bloombito is a "Spanglish" Twitter account that pokes lots of fun at the New York mayor by writing in Spanglish. She started writing:

As of the moment this article was written, the Twitter account has reached a whopping 19,781 followers after only 103 tweets.

Rachel Figueroa-Levin is enjoying her 15 minutes of fame, and is surprised to have gotten so much attention and so many interviews in such a short time. She promises to keep the account active as long as "it is still fun".

So we think it is funny to poke fun at a 69 year old mayor who certainly tries his best to represent the Hispanic/Latino population, which represents 27,5% of New York City's population. He may have a funny accent and all that, but we are pretty proud of him and think he is a role model for other people and politicians.

Want to learn Spanish better than the New York mayor?

See? People like Ms. Figueroa-Levin are the ones who keep someone like me down. I study Spanish but am shy and a little lacking in the self-confidence arena so when I do muster up the courage to speak Spanish, for example, out loud and in front of others, I hope there isn't someone like her around!

Wendy, I think she is just making fun because Bloomberg is a well-known person. In my expirience, normal people try to help learners, not to intimidate them.

I agree! She mentioned in interviews that she acknowledges the good and positive effort that Mr. Bloomberg is making, she just found his accent kind of funny and never really meant for the joke to grow so big. In fact, she mentioned in interviews that it was just between her and some friends at first to pass the boring storm hours in which they were stuck at home. Most Spanish speakers will be impressed at your effort and help you kindly.

Major props for him trying to learn Spanish, especially at his age. I can relate to how he feels as I am currently studying Spanish at the moment. feels like and up hill battle but when you get to the top the view is great!!

« Next Article: The Skin I Live In ignites Spanish cinemas