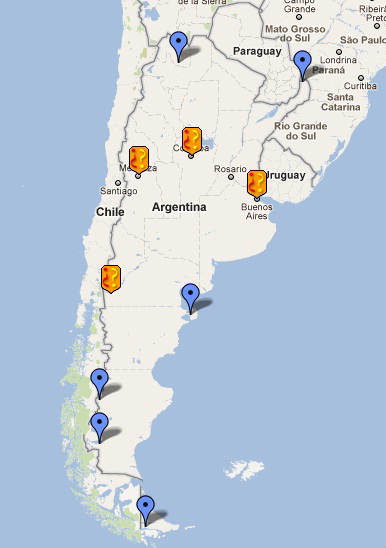 Although Argentina's official language is Spanish, Argentine Spanish is different from the Spanish spoken in Spain. In some ways it sounds more like Italian than Spanish and it is called Rioplatense Spanish or River Plate Spanish. It is a dialect spoken mainly in and around the areas of Buenos Aires, La Plata, Mar del Plata, Santa Fe and Rosario in Argentina, Montevideo in Uruguay, and far south of Rio Grande do Sul in Brazil.

Differences between the Spanish (Castilian) in Spain and Riverplate Spanish are ample; about 9,000 Rioplatense words are not used and most of the time not even understood elsewhere. So an avarage Spanish speaker can be surprised by the terms and the usage of the words. These include many terms from the basic vocabulary, such as words for fruits, garments, foodstuffs, car parts, etc., as well as local slang. In Argentina when you want to buy some peaches and strawberries for example, if you say melocotón and fresas the seller will look at you with a blank face. Instead you have to use the words durazno and frutilla. It has no effect if a single word like “Che!” (Hey!) is not pronounced with the proper intonation. How British and American English differ in many ways, of course it is very natural to have diverse usage of a common language like Spanish.

Speaking of diversity, slang in Argentina is an everyday habit and offers a great amount of different phrases. Chamuyo or lunfardo is the word used for slang in Riverplate Spanish. Lunfardo (or briefly, lunfa) began as prison slang in the late 19th century, so guards would not understand the prisoners. Then it appeared in Buenos Aires and its surroundings during the second half of the nineteenth century from the great contribution of the various waves of immigration, especially Italians, and words from American Indian, African and gaucho origin which had already existed in Argentina. Since the early 20th century, Lunfardo began to spread among all social strata and classes, either by habitual use or because it can be seen in the lyrics of tango. Tango lyrics use lunfardo rarely, but several songs of Celedonio Flores and Edmundo Rivero include lunfardo to a large extent. During the 20th and this century many of its words have gone to neighboring countries like Chile and Paraguay. Although some of the words are meant to be forgotten or not used, lunfardo still keeps alive. Some phrases like “Bajá un cambio!” = Chill Out! Relax! or on a break up it is said “Ya fuimos”= We’re through put its difference from the Peninsular Spanish.

There are special courses offered for foreigners to learn lunfardo as well as Riverplate Spanish so that they can have the chance to get into Argentine way of thinking and culture. It will be an entertaining way to learn Spanish with an Argentine style.

« Next Article: The first Tamale Fair launched in Iztapalapa

« Next Article:
The first Tamale Fair launched in Iztapalapa
» Previous Article:
The importance of learning Spanish