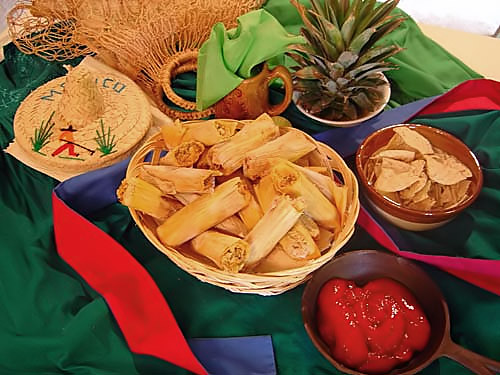 The first Iztapalapa Tamal Fair 2012 lauched yesterday, which will be from 2nd to 5th of February, between 9:00 am and 8:00 pm and it is expected more than 25 thousand visitors. The city, one of the federal districts of Mexico City, will host 40 exhibitors to serve the best tamales in the area.

A tamale or tamal in Spanish, is a traditional Latin American dish made of masa (a starchy dough, usually corn-based), which is steamed or boiled in a leaf wrapper. The leaf is left out only the filling is eaten. It can be filled with meat, cheese, fruits, vegetables or any other thing depending on the taste. Putting some pink colored sugar to the corn mix and fill it with raisins or dried fruits will make a sweet tamale (tamal de dulce).
Tamales have been traced back to the Ancient Mayans, who prepared them for feasts as early as the Preclassic period (1200-250 BC).
Currently you can find tamales from Patagonia, Argentina, to Alaska. In Mexico there are 500 varieties of tamales and 4 000 ways to prepare them. Tamale is a favorite food in Mexico, preffered at both breakfast and dinner, and often goes along with a hot Atole or Champurrado, corn-based beverages. Street vendors also sell tamale from huge, steaming, covered pots (tamaleras). It is accepted as a symbol of native roots and mestizaje in Mexico.

This year in fair area the visitors will taste lots of tamales such as the ancestral Mixtlapique, made or charales fishes; the tlapiques and tlapates, chicken tamale casings, purslane with beef tongue and beans, among other varieties, as well as of slices with sausage, blackberry style philadelphia cheese, pepperoni and cheese, and so on.

In a statement, from the head delegational of Iztapalapa, explained that the first Tamal Fair 2012, is intended to contribute to the assertion of corn as a key element in the basic food of Mexico, to help the struggle to maintain as a safeguard grain and keep it free of GMOs.

« Next Article: Get Yourself A Costume! It is Carnival Time in Spain

« Next Article:
Get Yourself A Costume! It is Carnival Time in Spain
» Previous Article:
Speak like an Argentine