The Holy Week in Spain

Easter holidays are lived with passion and excitement and it is a real joy to see the celebration of the Holy Week with Spanish traditions in every place.

It is a wonderful time to discover Spain, catch the special moments and live the traditional festivals differing from region to region but one thing is common. Almost every person participates in the acts and traditions. Marching parades, music, colorful flowers and the art of religious sculptures creates a moving and vivid image of Spain. There are 16 well-known Holy Week celebrations of International Tourist Interest. Six are held in Castile and Leon, three in Andalusia, three in the Region of Murcia, two in Castilla-La Mancha, two in Valencia and one in Extremadura region.

Holy Week in Andalusia - especially in Seville - is without doubt one of the most important religious holidays recognized in the world. Especially in the capital of the province where it receives the largest number of tourists from Spain. The week starts from Palm Sunday until the following Easter Sunday, and each day is full of presenting images depicting the Passion and death of Christ. The members of the various brotherhoods, dressed in characteristic robes walking through the streets with the beat of drums and music, some carry candles, rods or banners depending on their level of seniority. The most senior is the president who carries a golden rod. Each guild comes out of his church and has established its own course, although all must go through the "official race" that begins at Campana Street and ends with the departure of the brotherhood of the Cathedral. 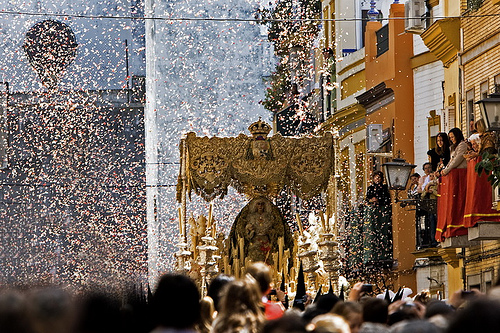 In Salamanca, the celebrations are one of the deeply-rooted traditions which combines the beautiful integration of the parades and fraternities. Places like the Plaza of the University or Casa de las Conchas host the marching parades and during the commemoration the mixture of conventional and modern merge together and it is also notable that on Holy Thursday the professors are dressed in the academic regalia.

The Holy Week is a bit more distinguished in Lorca and this year it will be celebrated distinctively with great effort after the earthquake of May 11 which affected both the city and its people. This week is also known as the 'Whites and the Blues'. The grand parade which is called as La Carrera include groups of people dresses as Egyptian troops, Roman emperors or gods going in carriages with religious sculptures. This festival was organised by the society of Lady of the Rosary, known as White Brotherhood. One year later, the society of Farm workers, also known as the Blue Brotherhood, set the first group base in the Old Testament called ‘Street of Bitterness’. During these days Lorca splits into white and blue people. But there are other brotherhoods participating to give contents and symbolism to this Holy Week: Purples, Red, black and Resuscitated brotherhoods. 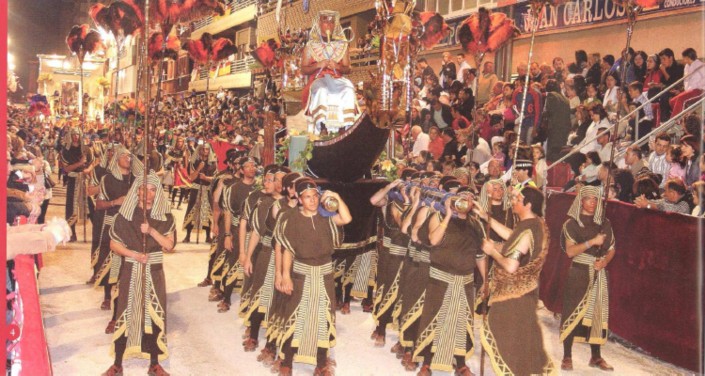 Every year during April, Spain is covered with tranquility and joyous atmosphere of the Holy Week and it is a must-see week even if you are religious or not.

I should examine with you here. Which just isn't something I often do! I get pleasure out of reading a publish that can make folks think. Also, thanks for permitting me to remark!

« Next Article: Spain on Strike