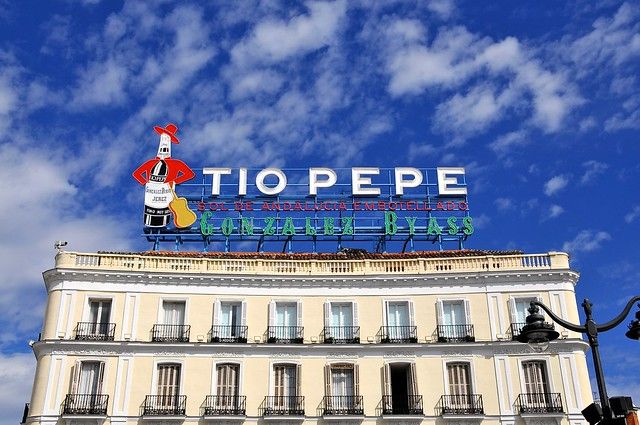 If you ever walk through downtown Madrid, you’ll see two neon signs that have come to form part of the city: the Tío Pepe sign and the Schweppes sign. Located in Puerta del Sol and Plaza de Callao, respectively, these two advertisements have become symbols of Madrid, like the screens of Times Square in New York or Piccadilly Circus in London.

The fact is that these advertising platforms have gone far beyond their original commercial motivation. They are now an integral part of the city’s skyline and appear in all the postcards and tourist photos of the city center. Want to discover how these two brands became icons of Madrid? Keep reading in English or click here to switch to Spanish.

In Puerta del Sol, next to the statue of the Bear and the Strawberry Tree and the Casa de Correos, there’s a monument that’s much less conventional. But that doesn’t mean it inspires any less interest in tourists! The Tío Pepe sign features a bottle of fino wine dressed in a short jacket and matching hat and carrying a Spanish guitar. Its slogan? Sol de Andalucía embotellado (bottled Andalusian sunshine).

The González Byass winery erected the first Tío Pepe sign above the rooftop terrace of Hotel París in 1935 to commemorate the centennial of the winery. At first, the advertisement showed a glass of sherry above the winery sign; it wasn’t until years later that the sign took on its current form.

Speaking of sherry, this English word is actually an anglicization of jerez, which in Spanish is both the name of the wine and the name of the place where it is made. Jerez is one of many Spanish wines with a Protected Designation of Origin.

The Tío Pepe sign is one of the sights in the capital city that tourists most like to photograph, but it’s also beloved by Madrileños. So much so that in 2011, when the sign disappeared from Puerta de Sol for three years to be restored, lots of people missed it. When the sign returned in 2014, it was pushed out of its original position by the new Apple Store and relocated to the top of a different building in the same plaza.

Schweppes: Presiding over Callao for 47 Years 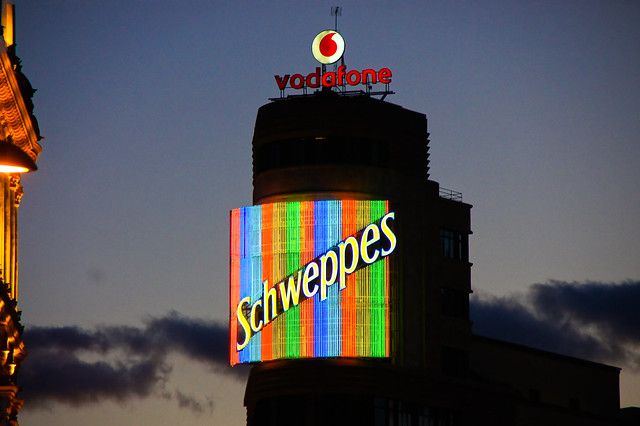 This famous brand of tonic water is the star of another one of Madrid’s most emblematic neon signs. Crowning the Carrión building, the Schweppes logo appears in yellow letters over a blinking background of multicolored stripes and has been dominating the panoramic view of Gran Vía since 1972.

Like the Tío Pepe sign, the Schweppes sign marked a turning point in the history of Spanish advertising. As time has passed, it has gone from being just a creative ad to forming part of the city’s collective imagination, an added bonus for the brand. 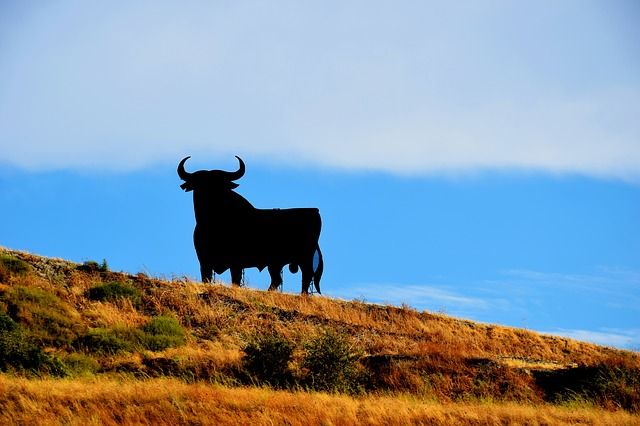 It’s a funny story. In 1987, the Spanish government banned the use of billboards on the highway to increase road safety. As a strategy to keep its signs up, Osborne decided to paint its already famous bull-shaped billboards completely black, leaving no trace of any reference to the brand. In the end, the bull billboards wound up being protected by the Spanish Supreme Court thanks to their “aesthetic and cultural interest.” In 2017, the Osborne bulls turned 60 years old.

We hope you found this post interesting. Now that you know the ins and outs of Spain’s most famous advertising spaces, we encourage you to watch the following video. In it, you’ll learn more about the world of brands in Spanish. Enjoy!

« Next Article: Ser or Estar: That Is the Question (Part I)