Seasonal Fests: How Carnival Is Celebrated in Spanish Speaking Countries 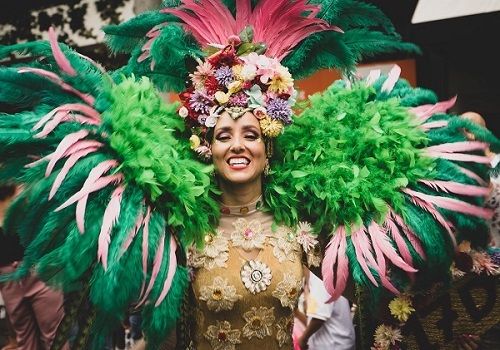 Carnival is one of the most beloved holidays by both kids and grownups, regardless of their age. While it is true that children usually enjoy it more than adults, —possibly due to its spontaneity and lack of sense of ridicule— Carnival is a time to dream, a time when we dare to be what we want to be without worrying about what others say, a celebration to live without complexes.

February is already here, and with it all the preparations for Carnival celebrations, but... Why do we dress up? What is the origin of Carnival? Although there are different theories about it, they all seem to agree that it is an event in which seriousness and rectitude are forgotten to give way to fun and revelry.

Keep reading this article in English or switch to the Spanish version to perfect reading skills.

The Origins of Carnival Celebrations

While some claim that the origin of the Carnival dates back a long time before, —about 5,000 years ago— most sources suggest that it is a holiday related to the pagan festivities in honor of Dionysus, the Greek god of fertility, the wine and earthly passions. However, it was not until the Middle Ages when the celebration spread throughout Europe.

When is Carnival Celebrated?

Carnival is one of those seasonal events, that is, one of those celebrations that take place on very specific dates and for a reason related to the season or time of the year in which we are. Although Carnival dates may vary depending on the country or continent, the festivity usually starts on the Mardi Gras or Fat Tuesday and culminates on the day before Ash Wednesday   —known as Shrove Tuesday. Mardi Gras represents the practice of “the last night of eating rich, fatty foods before the ritual fasting of the Lenten season” before and during the Easter Holidays. In fact, the name "Carnival" means literally "abstinence from meat."

How is Carnival Celebrated Today?

Although Carnival is an ancient tradition, each country holds its own customs and rituals nowadays. Anyway, Carnival is a time to dress up, a masquerade party in which people change their roles. Moreover, it is very common to accompany the event with concerts, music, feasts and all kinds of recreational and cultural activities. Below, you will find a list with some of the most interesting Carnivals in Spain and Latin America.

Spain is a country rich in traditions, from the Holyday Season customs to the rituals of the Holy Week, passing through Carnival celebrations. Some of the most popular are those of Águilas (Region of Murcia), Cádiz (Andalusia), Santa Cruz de Tenerife (Canary Islands) and Ciudad Rodrigo (Salamanca, Castilla y León). Next, we describe some of the traditions you’ll enjoy if you live the Carnival experience in Spain.

The Carnival in the Canary Islands is perhaps the second most famous in the world after Brazil. Santa Cruz de Tenerife offers a party that shines through the colorful parades and floats. The contest of the Carnival Queen is especially important, and the winner is usually the most striking and ornamented design. It was declared a Festival of International Tourist Interest, the biggest award an event can obtain.

In Cadiz, this party is the most relevant of the year by far. In addition, it was declared a Festival of International Tourist Interest, a distinction that shares with Santa Cruz de Tenerife and Águilas, in Murcia. Through the cheerful comparsas and chirigotas —musical chorus typical from Carnival that sings humorous songs through the streets of the city— Cadiz becomes a satirical stage to protest and homage the hottest events of the year. 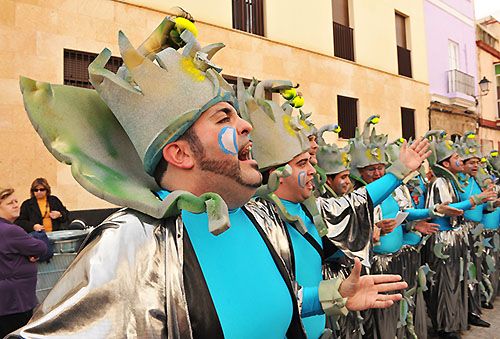 The so-called "Carnaval del Toro" (Bull Carnival) is the main festival of a small town called Ciudad Rodrigo, in Salamanca, Castilla y León, Spain. The characteristic that distinguishes this celebration from the rest —and gives name to the event— is the celebration of bull runs and capeas. Especially relevant are the run of the “Domingo de Carnaval” (Carnival Sunday) and the so-called “Toro del Aguardiente” (Firewater Bull)—home-made spirits and foods are distributed during the bull run—held on Mardi Gras in the early morning.

The Carnival of Águilas is the most relevant in the Region of Murcia and one of the most popular in Spain. It was declared a Festival of International Tourist Interest in 2015, distinction that shares with those of Cádiz and Santa Cruz de Tenerife. The most special feature about this celebration is the so-called “Carnaval de la Noche” (Carnival of the Night), an event that moves the spectacle to the streets of this small town throughout the whole night.

Although it is true that the Brazilian Carnival is one of the most relevant traditions in Latin America, Carnival is celebrated in other countries on the continent, each of them performing its own customs and traditions. Here you go a sample of the attractions you’ll find if you get to experience some of the most popular Carnivals in Latin America.

This is not only the most popular Carnival in the Caribbean, but also one of the most popular festivities in the islands. Moreover, since the Carnival of Santo Domingo coincides with independence celebrations, the principal actors are some very characteristic and curious characters found in the folklore of the Dominica Republic: the “Diablo Cojuelo” (“Devil Cojuelo"), the “Roba la Gallina” (the “Steal the Hen”), or the so-called “Pepines”. During these holidays, all the floats in the region gather in the capital and compete for prizes awarded nationwide. 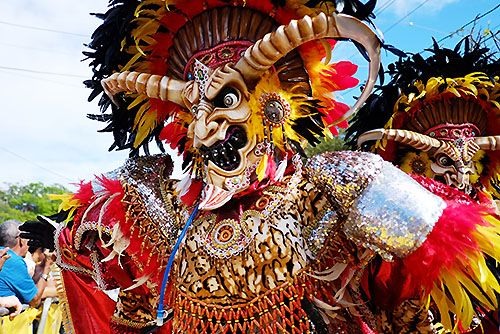 The Carnival of Veracruz, Mexico, has been declared the "Happiest Carnival in the World." This is probably due to the festival of light and color that shines through its parades, as well as the musical and festive atmosphere that floods its streets during the almost 10 days of festivities. One of the most special events is the so-called “Quema del Mal Humor” ("Bad Mood Burning”) opening celebrations on the first day of Carnival.

It takes place in the province of Entre Ríos, Argentina, every weekend of January and February. It is so important that it is called the “Carnaval del País” ("Carnival of the Country"), and is famous for its comparsas, which compete to win the first prize of the contest. Each year a different topic is chosen, and costumes and songs are composed to celebrate it. It is one of the essentials in the list of Latin American Carnivals.

The Carnival of Barranquilla is the most important folklore festival in Colombia. It was declared a Masterpiece of the Oral and Intangible Heritage of Humanity by Unesco in 2003, and its main events are: the so-called “Batalla de las Flores” ("Battle of Flowers") and the colorful parade of floats. This Carnival most important actors are three characters that are very important in the folklore of the region: “Rey Momo” (“King Momo”), “Maria Moñitos” and the “Hombre Caimán” (“Cayman Man”). In addition, different theater and music festivals are also held in the city on these dates.

At don Quijote, we hope you enjoy this post and discover some of the most colorful and original Carnivals in the Spanish-speaking world. In addition, we know that you will take the opportunity to practice Spanish and establish ties with speakers of different varieties of the Spanish language. 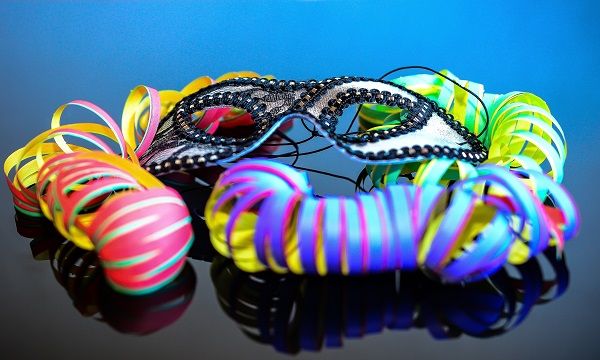 « Next Article: 2020 Oscar’s Shortlist: “Pain and Glory” and “Klaus” Nominations