Spanish History Through the Art of Painting 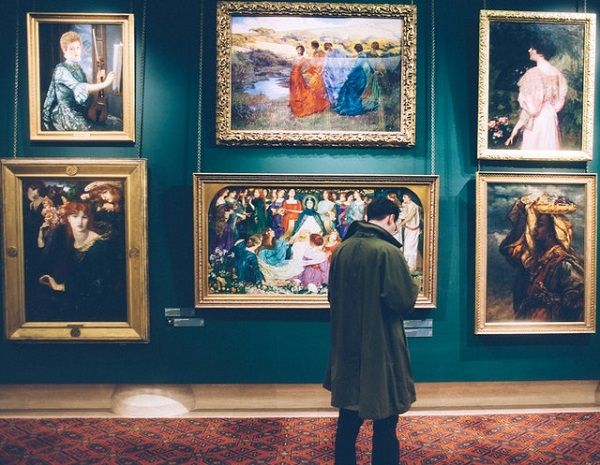 The art of painting is a form of expression that has endured beyond time and space, a place where society has projected the lights and shadows of humanity, all that we admire and reject of ourselves. As it happens with historical narratives, the art of painting is the reflection of our actions, a perspective on the events that have shaped our collective and cultural imaginary.

From mythological images and landscapes that elevate the spirit, through illustrious portraits of high society and until the social and individual realities embodied in different scenes of the art of painting; Spanish history has been drawn through different paintings that left an important heritage at a time when we still did not have the faithful reflection of photography or tv.

Keep reading this article if you want to discover the history of Spain through the art of painting in English. Click here if you prefer to do so in Spanish. 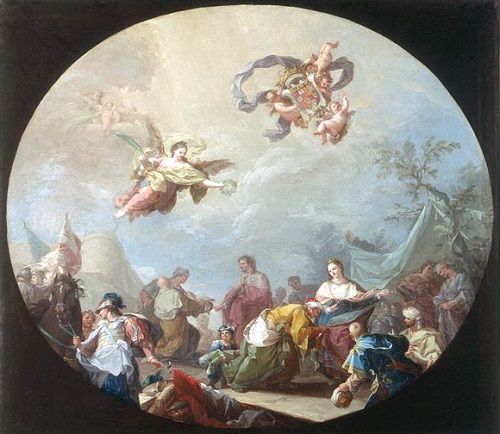 Although there is another painting —exhibited in the Conference Hall of the Spanish Senate and painted by the great Francisco Pradilla— with the same name and more famous, this other historical painting by the Spanish painter Francisco Bayeu y Subías. It served as a sketch for the fresco decorating in the former dining room of the Royal Palace of Madrid.

After several years of fighting against Arab influence, the Catholic Monarchs of Spain managed to conquer the ancient Kingdom of Granada in 1491, thus defeating the last Muslim kingdom of the Iberian Peninsula. The conquest of Granada marked the end of the so-called Reconquista, which lasted about 700 years and was one of the most important chapters in the history of Spain.

Virtual visit of the painting La rendición de Granada at the Prado Museum. 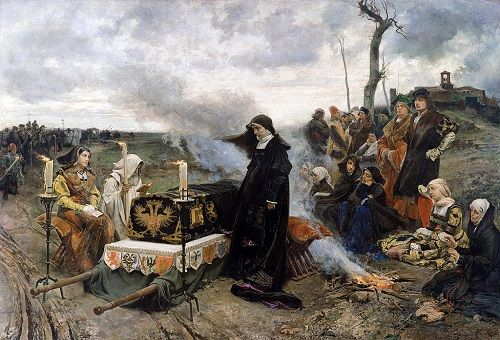 This work by Francisco Pradilla y Ortiz portrays a very important character in the history of Spain: Joanna of Castile. Better known as "Juana la Loca", Joanna of Castile was one of the great muses of the art of painting. Daughter of the Catholic Monarchs, she went down in history for her stormy marriage with her cousin, Philip the Handsome or the Fair. Although she never had any real power, she was Queen of Castile after the death of Isabel the Catholic in 1504. Her supposed mental illness caused her to be locked up in the Royal Monastery of Santa Clara, Tordesillas, from the year 1509 until her death in 1555. In this historical painting we can see her next to her husband's coffin, dressed in mourning and with an indifferent expression. 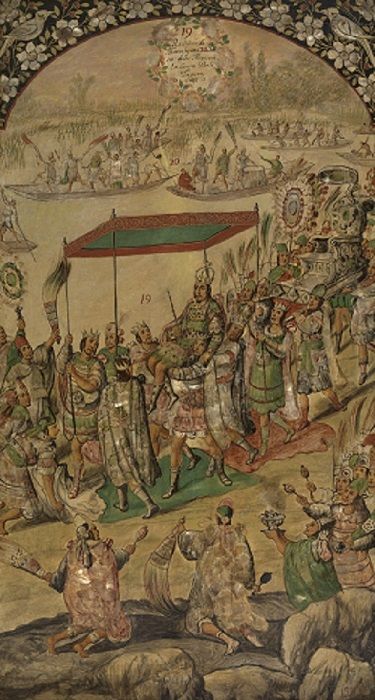 This is a historical painting by Miguel and Juan González. It belongs to a collection of 24 pieces created especially for King Charles II, "The Bewitched" of the Austrias’ dynasty. Hernán Cortés landed in Veracruz, Mexico, with a small army in April 1519, a fact that marked the beginning of the conquest of the Mexican territory. Thanks to the alliance with indigenous Tlaxcaltecas and Totonatas, the advance of the Spaniards reached the ears of Moctezuma II, the Aztec Tlatoani, and he presented the invaders with presents and riches in the hope that they would leave. This is the moment that immortalized this fantastic historical painting. 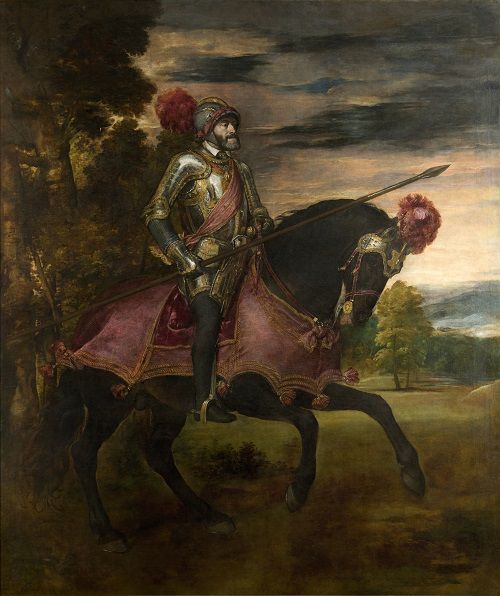 Both the power and the gallantry of Emperor Charles V, a great figure of the Spanish history, are reflected in this magnificent oil on canvas work of Titian or Tiziano, the great Italian painter of the Renaissance. This historical painting shows the victory of the young German emperor, son of Juana I of Castile, at the beginning of the 16th century at the Battle of Mühlberg. History says that the theories of religious Protestantism by Martin Luther had spread throughout central Europe. In the year 1530, several Lutheran nobles allied themselves in the so-called "Smalkalda League" and faced the Catholic Carlos V, who defeated his enemies with bravery.

An enraged sea comes alive in this impressive painting by Spanish painter José Gartner de la Peña. Although in those years it was known as the Great Navy, the Invincible Navy was a powerful naval fleet sent by King Felipe II to the British Isles in 1588 - Spanish Golden Age - in order to take possession of them overthrowing Queen Elizabeth I. The support provided by the British to the independence of Flanders and the constant pirate approaches on Spanish ships led the king to try to end the Anglo-Spanish war once and for all. However, it was a great storm the main cause of the sinking of the Invincible Navy, becoming one of the greatest enemies in the history of Spain.

Virtual visit of La Invencible at the Prado Museum

Las Meninas is Velázquez's masterpiece, as well as one of the most studied paintings in the history of universal art. This is the portrait of the family of Felipe IV, in addition to a perfect example to illustrate the unique pictorial ability of this author, especially as regards his masterful use of perspective. While the historical painting reflects in detail the opulent isolation in which both the court and the royal family lived, the country was entering a stage of decline that would end the Austrian dynasty, one of the most important in the history of Spain.

Virtual tour of Las Meninas at the Prado Museum. 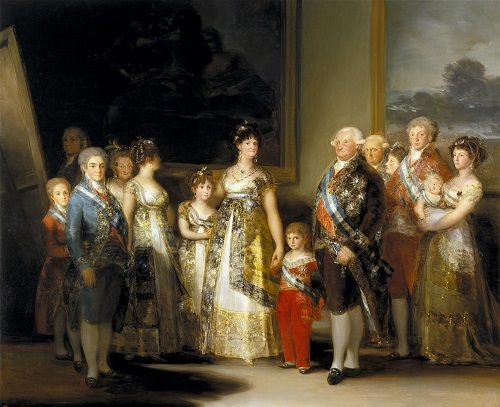 This historical painting is a portrait of the royal family painted by Francisco de Goya. The painting hides some details that cannot be seen with the naked eye. The reign of Carlos IV passed to the history of Spain for its complete abandonment of the country's needs, which were left to Manuel Godoy while Carlos IV was engaged in hunting and other hobbies. Family and political tensions led his son, Fernando VII, to lead the famous Aranjuez mutiny in order to defeat Godoy and proclaim himself king of Spain. The family distribution in the painting is similar to that of Las Meninas by Velázquez. In addition, the fact that Queen Maria Luisa occupies the central position in the painting, normally reserved for the king, is considered a premeditated mockery by the Spanish painter towards the lack of command of the monarch. 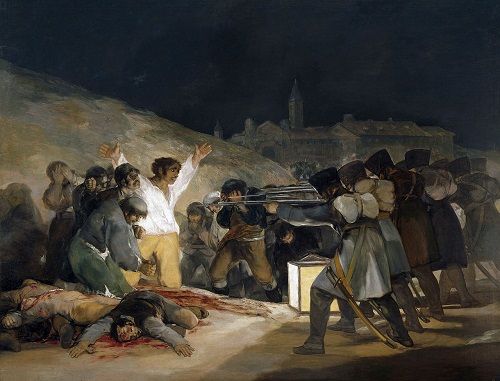 Los fusilamientos are probably the most popular picture by the great Spanish painter of the Romanticism period: Francisco de Goya. This painting represents the massacre of the rebels by Napoleon's forces and the French repression against them in the Spanish War of Independence.

Virtual visit of Los fusilamientos at the Prado Museum.

At don Quijote, we hope you enjoyed reading this article. If you want to learn more about the art of painting in Spain, check out our video about these 5 Spanish painters you should know:

« Next Article: Capitalization Rules in Spanish