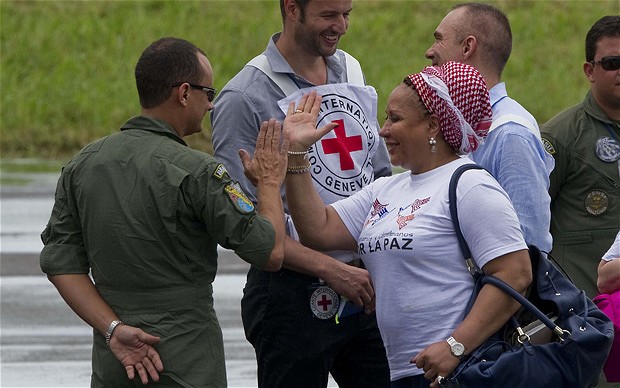 I couldn’t decide what to write about this week; a lot has been going on in Spain that, not being very economically minded, I thought I’d leave to the experts. So I turned to Latin America for a topic, and found an abundance!

In Colombia, the last 10 military hostages have been successfully liberated! FARC (The Revolutionary Armed Forces of Colombia) have been fighting for power since the 1960s, and took military hostages with the intent to use them as bargaining tools for the release of captured guerrilla soldiers. Some of those released today have spent 14 years in captivity, and finally regained their freedom today after the Brazilian military flew them to an airport in Villavicencio, capital of Meta department . Even their pets were freed! A peccary, a kind of wild pig, and a monkey, befriended in captivity, after 14 years together were clearly to precious to leave behind.

Today also marks the 30 year anniversary since the start of the Falklands War, between Argentina and the UK. The conflict in the Malvinas, as they are known to Argentina, lasted 74 days, and a total of 255 British servicemen and about 650 Argentines died. Argentina's President Cristina Fernandez de Kirchner paid tribute to the "hundreds who came to fight here, to this territory, to the islands, and to the hundreds who laid down their lives". British Prime Minister David Cameron saluted the "heroism" of the soldiers, airmen, sailors and marines who served in the conflict.

In Mexico, the presidential race has officially started. There are a potential 78 million voters due to cast their ballots on July 1st, and as many as a third are apparently still undecided. There are four candidates running;

The Venezuelan President, Hugo Chavez is returning to Cuba for another round of cancer treatment. The 57 year old, who has lead the country since 1999 is having radiotherapy after surgery to remove a second tumour from his pelvic area in February. The Venezuelan leader said he was determined to overcome cancer and win re-election in October.

And last but by no means least, President Rafael Correa of Ecuador has decided to boycott this month's Summit of the Americas in Colombia, because Cuba is not invited. He wants all 8 members of the leftist Bolivarian Alliance - which includes the Dominican Republic, Nicaragua, and Bolivia - all boycott the summit, which countries including the USA are expected to attend. Ecuador has recently been suffering mudslides from very heavy rainfall, and as many as 4,700 have fled their homes. Unfortunately, the rain is predicted to continue.

« Next Article: EuroVegas Complex in Spain

» Previous Article: Increase in Balcony Prices During The Holy Week

« Next Article:
EuroVegas Complex in Spain
» Previous Article:
Increase in Balcony Prices During The Holy Week