Mystery and meaning in the Day of the Dead

The Day of the Dead is a very special day in Mexico. Far from being a sad or gloomy day, its color, animation and aesthetics celebrate life and its triumph over death. It is something that goes beyond the sweets, makeup, the attire... That is why we are going to show you the meanings behind the beauty of this day. 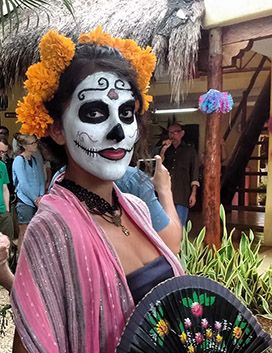 First we should talk about the eye-catching Catrinas, amusing representations of a skull or bones painted on the face well-dressed women. Its invention dates to 1910, when figures of animated skeletons appeared in the newspapers satirizing the politics of the time. A Catrina, called Garbancera at the time, represented a snobbish sector of society who would dress, talk and act as if they were foreigners, ignoring their cultural roots. The famous painter Diego Rivera fell in love with the persona and gave it the name we all know it by today- Catrina. As such, Catrina has now become the indisputable star of the Day of the Dead and even an "it girl". In fact, the design school of the beautiful city of Leon, in the state of Guanajuato, organizes a fashion show each year where its students show their creations based on this character. In another of our destinations, Oaxaca, these Catrinas are also to be seen, but this time in an eerie procession through the streets.

Typical of this date are candy sugar skulls, a sweet confection called alfeñiques. They are often seen in offerings on the altars that fill streets and neighborhoods during this day, as well as given as gifts to family and friends, often bearing their name. Their roots can be traced to the funerary rites of Mesoamerican cultures, in which the skulls of deceased ancestors were displayed. Today, in Leon, these alfeñiques are also revered in a festival dedicated exclusively to them. There are many, many forms of this confection which fills the stomach, sweetens the spirit and charms the eyes. 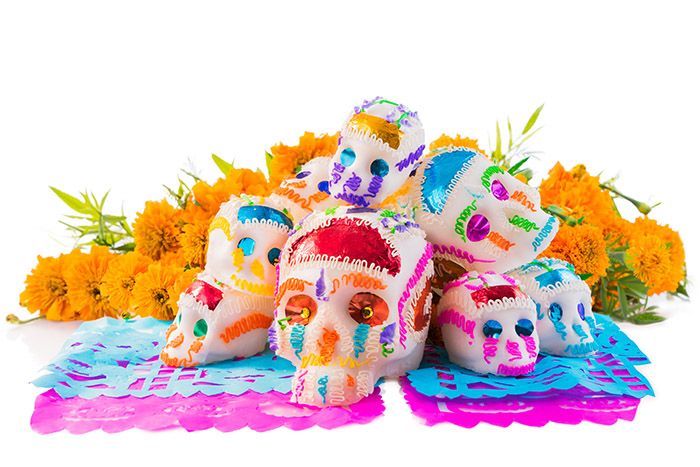 The most important and meaningful element is undoubtedly the offering. It has to do with that colorful and fascinating altar that we can see in houses, shops, restaurants... and hides many more secrets than we can imagine.

The altars for these offerings always have seven levels, count them if you want: a photo of a saint or a virgin is placed on the first one; the second is dedicated to the souls that are in purgatory; salt is put on the third level for the souls of the children in purgatory; also in the room, pan de muerto (sweet bread with red sugar), that must be made by the deceased’s relatives, is placed; the fifth holds fruit and the departed’s favorite food; a photo of the deceased is placed on the sixth level and on the seventh a rosary of tejocotes (a yellow, bittersweet fruit) or limes. 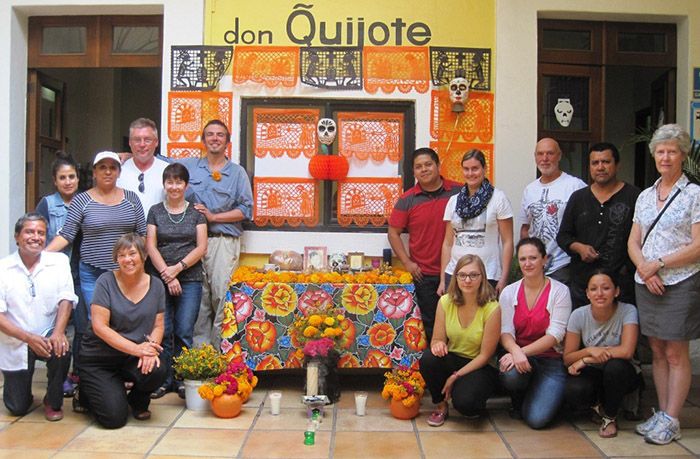 With so much symbolism and art contained in these altars, it is not surprising that every year the inhabitants of Guanajuato wait anxiously for the traditional monumental offering that the students prepare on the steps of the University. In another state, Oaxaca, cemeteries become impressive successions of offerings and altars illuminated by the spiritual candlelight.

The day of the dead in Mexico, as we say, has something inexplicable, mystical, lasting. Something that really makes us think that our loved ones still protect us.

I loved how there is so much information